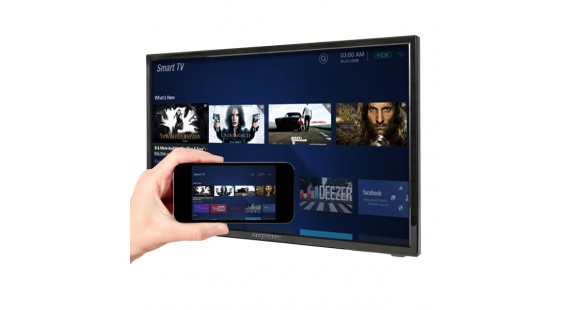 Majestic Global was the world's first company to develop and produce a 12 Volt LCD TV back in 2000. Fast forward the company's growth and technology advances, Majestic remains a global leader in designing specific TV's that can handle the harsh Marine environment and survive the tough outback conditions. The Majestic products are built with the highest possible standard and used by some of the world's best known Boat Manufacturers such as Regal Boats, Rinker Boats, Four Winns, Ranger Tugs and many more. You can be assured the quality and reliability as Majestic covers every product with a 3 Year International Warranty.

The New Majestic SLT241 24” 12 Volt LED TV has set a new standard in 12V LED TV technology by adding state of the art Smart TV technology. The Majestic SLT241 24” 12V LED TV is packed with new technology such as Android 9.0 Smart Functions, Optical Audio Output, PVR, Smart Remote that has keyboard and Mouse Pointer Technology, Bluetooth 4.2, Screen Mirroring from Tablet or Phone to the TV wirelessly, ARC, 2x USB for Multi Media and a high brightness LED Panel with Full HD video resolution. Plus it has a built in Satellite TV Tuner for those countries with DVB-S2 compatibility.


Power Consumption: Working with RV and Boat manufacturers world wide since 2000, Majestic knows that power consumption is a critical factor for RVs and Boats. Most brands do not care about this as they believe consumers do not care. However Majestic knows that every extra Watt the TV uses is some form of energy cost to the end user, but more importantly in many situations domestic branded TVs draw so much power that over night they can flatten your battery system. Majestic's engineering team has made sure that the design of the TV only uses the power it needs to and therefore is ultra efficient.

Low Current: The Majestic range of TV's are designed to be as efficient as possible. The concept is simple, just apply power to the parts of the TV that working. What this means is that the TV has no power wastage, unlike many brands including domestic TV's where they power apply power and everything is powered up but not being used, there is a major waste of power. This simple feature is why the Majestic 24" SLT241 only draws 2 Amps or 24 Watts on 12V DC making it the lowest power consumption for a Smart TV on the market.

The TV comes with a Keyboard remote control and built in laser mouse pointer:

Keyboard Remote: To ensure simplicity of use the Majestic SLT241 comes with one remote that has a built in Keyboard. This makes it very simple for those wanting to search online, rather than clicking letters on a TV screen you can simply select the letter on the remote control. This remote uses Bluetooth technology through the USB port ensuring accurate performance.

Laser Mouse Pointer: Simply pressing the Red Arrow next to the home button on the remote control and you enable a Laser Mouse Pointer on the TV screen which allows you to surf the screen with incredible ease. It is these extra features and engineering capabilities that put the Majestic TV ahead of the competition when it comes to the ultimate in 12V LED TV technology.

Some other cool features include:

Bluetooth 4.2: Using the latest technology in Bluetooth, Majestic has installed Bluetooth 4.2 for enhance privacy and superior speed. This technology is lower power with significantly higher speed and increased stability in data transfers. For those customers wants to get the best out of their audio system you can stream via Bluetooth audio to the TV and then use the optical audio output into Fusion or other optical audio input compatible devices. The Bluetooth 4.2 is bi-directional so you can send Bluetooth to the TV such as music from your phone to the TV and from the TV to a set of Bluetooth speakers or stereo system.

WiFi Screen Share: Majestic has been leading the technology to allow phones and tablets to be interfaced to the Majestic range of TV’s using the MMMI technology for many years. With the latest technology in WiFi Chip sets Majestic has now enabled a direct WiFi streaming of your screen from your Android or iOS device. This acts like a mirror cast function whereby you connect the mobile device being a phone or tablet to the TV via direct WiFi and stream the screen onto the TV. This is not done via Bluetooth, but through direct link WiFi therefore not needing other WiFi devices in the boat or RV to ensure best and most stable possible connection.

Smart Functions:  The Majestic SLT241 24” 12V LED TV has built in Android 9.0 Smart functionality. This allows you full smart functions so that you can download various Apps to give you the customisation of the Apps you want to use. Combined with a Keyboard and Mouse Pointer Remote control gives you the ease of use for simple access to websites, games and Apps.

You can pre-order now – Buy Here

All fields are required